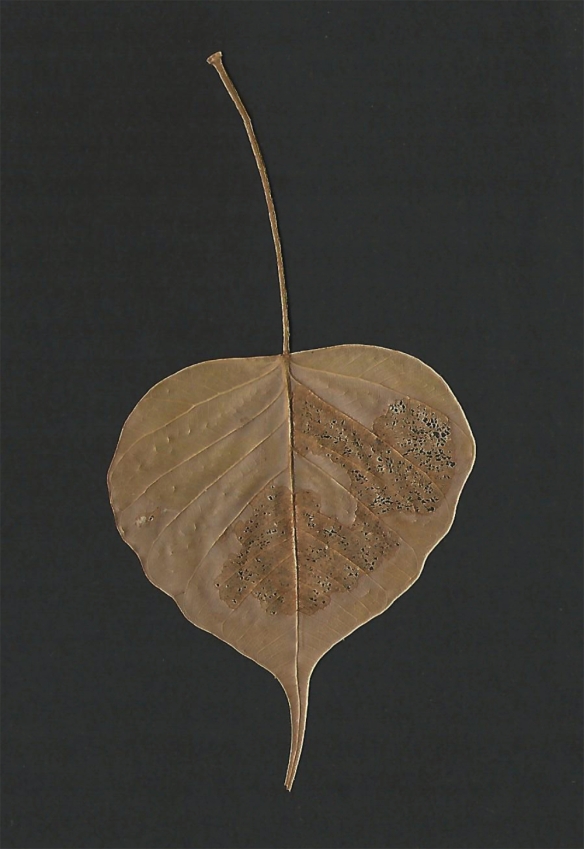 I hope all is good with you we are doing well.

The other day I got home from work and I saw this leaf in a nice wooden frame, I couldn’t remember seeing it before so I asked T where it came from.  He told me that it’s a leaf from the Bodhi tree at Bodh Gaya in India and it has been pressed between the pages of a small buddhist book we bought when we were there in spring of 1976 over 41 years ago!

You probably know that Bodh Gaya is a very sacred place.  Siddhartha Gautama attained enlightenment meditating beneath the Bodhi tree and became Buddha in the 4th century BC. Of course the tree that this leaf came from is not that original tree but one planted on the same spot in 1881.

There are many buddhist temples in Bodh Gaya the main one which marks the spot where Buddha gained enlightenment under the tree is the Mahabodhi Temple.  There was a big religious festival while we were there.   T told me the festival was to celebrate the solar eclipse which took place on 29th April.  I don’t remember that bit but I do remember the masses of Tibetan monks assembled at the temple, the thousands of butter lamps, the music and the chanting.  It was a spectacular and moving event, we even recorded some of it on a cassette which I’m sure we still have somewhere, but we have no way of playing it now.

Anyway I am so pleased this beautiful leaf decided to show itself again after all these years and bring back some magical memories.

I’ve been wondering what new art I could share with you now that I’ve completed the Radiant Warrior Women project.  This page is from an altered book I started back in 2012 and still haven’t finished.  The book was a children’s book called Bringing Down the Moon, but it won’t be recognisable when I’ve finished altering it.

This page isn’t actually new but I haven’t shared it before.  It’s the first page in the book and it was created when I attended the Call of the Wild Soul Art Retreat run by Erin Faith Allen at a place called Croydon Hall in Somerset in September 2012.  The workshop was run by Orli Aveneri.  The page was a collaboration between myself and (I’m not sure about this but I think it was) Pat Beaumont from Liverpool we both worked on each others pages under Orli’s guidance. I really like how my page turned out.

Attending the Call of the Wild Soul Art Retreat was a huge, scary adventure for me.  As an introvert I was out of my comfort zone and incredibly nervous (actually “freaked out” would be a more apt description of my state of mind), but it was a fantastic experience.

The other workshops I attended on the retreat were run by Teesha Moore, wife of my friend Tracey Moore who I had met in 2007, and they have both had a massive and positive impact on my life and my art. I love them both.

The truly wonderful Flora Bowley also ran a workshop and she got us dancing and painting intuitively.

I met some fantastic people at Croydon Hall and many of them have remained friends. (I met up with some of them recently when I went to London to see the Basquiat exhibition at the Barbican called Boom for Real, I’ll tell you about that in another post). The whole Art Retreat event was good for my soul and my creativity.

That’s all for now.  Take good care of yourselves and I’ll see you soon.

Big love from me

© Janette Gregson and ajsartjournal, 2011-2017 unless otherwise stated. Unauthorized use and/or duplication of this material without express and written permission from this blog’s author and/or owner is strictly prohibited. Excerpts and links may be used, provided that full and clear credit is given to Janette Gregson and ajsartjournal with appropriate and specific direction to the original content.

3 thoughts on “From a sacred place”