I hope you are all good and happy.

I’ve been off-line again, but this time not from choice.  The router broke and we were without internet for 10 days, at first I wasn’t bothered about it, but then I thought I should try and do something as I had bills to pay so I spent hours on the phone talking to Tech Support from my ISP, they had me resetting the router, changing pass words and trying to connect again and again without success.  After four evenings of wasted time and still no success someone with a strong Indian accent who I could barely understand and who I think had taken far too much Valium promised to investigate and to phone me back the next day.  He should have phoned me on Friday, but he didn’t, then it was the weekend followed by a Bank Holiday and still no internet.  So on Tuesday I phoned Customer Support and asked if they would replace the router they had originally sent me for free, but I was told as it was out of warranty I’d have to buy one.  I could buy it from them and it would be sent out in 3 days time.  So I went to local shop and bought one instead.  I seems to be working OK so far. (Fingers and Toes crossed while I said that)!

Still the good thing was I had plenty of time for being creative so I’ve finished two big paintings and started a third.  I’m not ready to share those yet though so the image above is another page from my Tikis and Totems Journal that I finished while we were on holiday.  This page was an experiment in black and white – I prefer bright colours.

Here is the image with just collage and then completed with pen work: 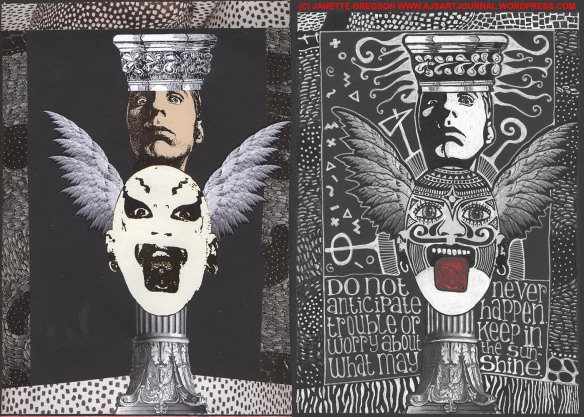 That’s all for now, take good care of yourselves and I’ll see you soon.

© Janette Gregson and ajsartjournal, 2011-2016 unless otherwise stated. Unauthorized use and/or duplication of this material without express and written permission from this blog’s author and/or owner is strictly prohibited. Excerpts and links may be used, provided that full and clear credit is given to Janette Gregson and ajsartjournal with appropriate and specific direction to the original content.