I hope all is good with you.

So the reality is I’ve become a ‘not very good blogger’ but that’s just how it is at the moment and I’ve got to stop letting it worry me.

The Ryde Arts Festival is now well under way and got off to a spectacular start on Friday evening with the opening of the Landmark Trees project and a concert of a piece of music composed (by two young composers) especially for the event.  It was fantastic!

What was particularly good about it was that the hangings for the Landmark Trees were made by a local artist working with four different youth groups.  It took them about 3 months to paint them.

The concert ‘Seasons for a Soldier’ was played by the local Symphony Orchestra but also included an adult choir, a youth choir and the marching band of the local Sea Cadets.

The whole piece is about the seasons of 1914 – from optimistic Spring through to desolate Winter, reflecting on what it must have been like for all the young men who, in the autumn and winter of 1914 volunteered to fight for their country.  There are ribbons on all the trees outside with the names of the men from the town who lost their lives in WW1.

I’ve been volunteering over the weekend: on Friday and Saturday evening at events in the old church and this morning just sitting and welcoming the visitors who came in to see the installation and listen to a recording of the music.  (Actually I did a bit of art too while I was there) 🙂  Also yesterday afternoon I spent several hours updating the Ryde Arts Festival website.

You can’t see it in the picture (because people are sitting over it) but on the floor in big white lettering are the famous words from a Rupert Brooke poem “…That there’s some corner of a foreign field. That is for ever England”.  The chairs are just put out if there is a concert, but during the daytime people walk into a vast empty space with these wonderful tree hangings, the line of poetry on the floor and the music playing.  I think it’s really impressive and I’m proud to play a small part in the annual Arts Festival.

The spread above is in my Altered Book Journal.  I was a bit surprised in how it turned out, but that’s the way the pages wanted to be so who am I to argue?

I don’t know anything about Anwar Sadat other than he was the President of Egypt from 1970.  I’m guessing like most politicians he had good points and bad.  He took his country to war with Israel but he also entered into Peace Talks with Israel which culminated in a Peace Treaty being signed.  He and Israeli Prime Minister Menachem Begin were awarded the Nobel Peace Prize. On 6 October 1981 President Sadat was assassinated during the annual victory parade held in Cairo.

Anyway I really like the quote and I needed something with an Egyptian flavour to compliment the images (which came from a picture I bought in a charity shop yesterday).

Until the next time, have fun 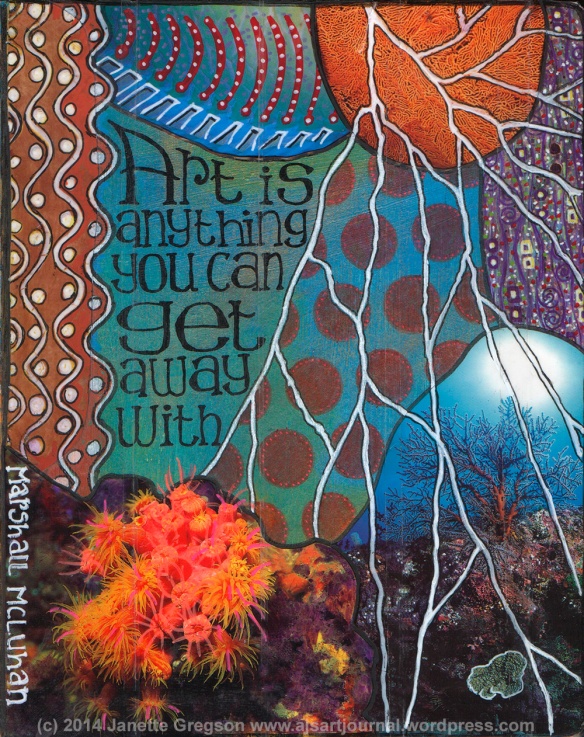 Thank you for your kind comments after my last post.  To be honest I am still feeling conflicted about the whole blog thing and I need to give it some thought.

In the meantime I have finished the front cover of my board book.  Just got the back cover to do now, but that could take a few weeks at current rate of progress.  I sealed the collage with clear packing tape, so it has a gloss finish.  You can see the lines where the tape overlaps, but I don’t mind that.

I hope you are keeping well and happy.  I’m really enjoying the sunshine and long hours of daylight at the moment.

It’s been a while so I hope all is good with you.

According to WordPress it’s 3 years ago today that I started this blog, so Happy Birthday Blog!  Unfortunately recently I’ve been neglecting things and here we are in the middle of June and this is my first post of the month.  What happened?  I used to post regularly, often 2 posts a week, but now there are long gaps.

Working on the kitchen refurb was the start of the upset of the routine and finding the time is always a problem, but it’s more than that.  I’ve been wondering what it’s all about? Why am I putting all this stuff out there? I always found time in the past so what’s the problem now? Also there is a bit of guilt, people come along here and leave lovely comments and I read them and have every intention of replying, visiting their blogs and being supportive – every intention but I’m not always successful with my intentions.  So does that make me a bad blogger? I’m not asking for or expecting anyone to give me any answers but these are just some of the thoughts I’ve been having and I’m still confused about it…

Anyway, I’ve still found time to be creative – I’ve been working on a couple of paintings, on several journals and I managed to finish my second Mandala book, the images above and below are the front and back cover of the book.

Take good care of yourselves, until the next time

© Janette Gregson and ajsartjournal, 2011-2019 unless otherwise stated. Unauthorized use and/or duplication of this material without express and written permission from this blog’s author and/or owner is strictly prohibited. Excerpts and links may be used, provided that full and clear credit is given to Janette Gregson and ajsartjournal with appropriate and specific direction to the original content.

An online art club by Teesha and Tracy Moore, it's full of goodness and inspiration!